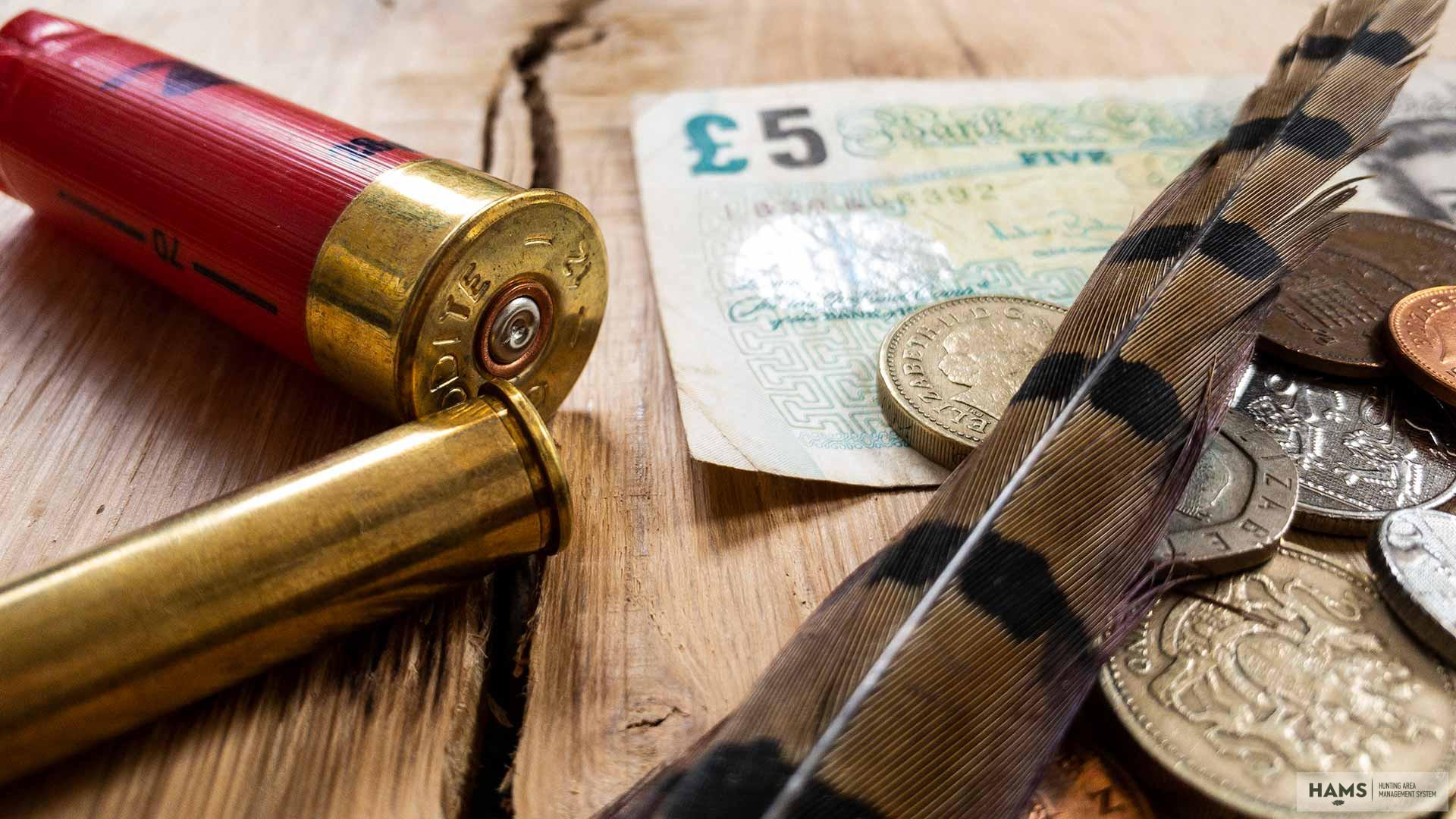 This is why sustainable conservation is so damn profitable!

The value of quality deer management

Every retailer’s dream and one of the fundamentals of mass production is to increase the volume of goods sold whilst lowering production costs as this leads to increased profitability.

So, if we translate this to wildlife management should this mean that if we have more deer and/or more pheasants on our land revenue and profits will be higher?

But is it really that simple?

More hunts and shoots equals more work, more advertising, more guests, and many a long night during the season… We just cannot do this without limits.

Also, what if we overshoot the land? (see our article on The consequences of overshooting and undershooting game populations.)

So, is there another way to make our wildlife management more profitable and sustainable?

If we aim for the market for premium products and luxury goods where profit depends on quality and not on volume. No question, in this case we have to “produce” more valuable products.

How can we achieve a higher profit margin whilst investing less?

Is quality over quantity the rule of sustainability?

Trophy hunting is about quality. That’s pretty damn clear if we take a look at the pricing of big game hunts.

The excitement is different if you go for a unique, large trophy than for your twenty-eighth roe deer with small antlers.

No, we want that moment when that big, old beauty slowly walks out from the trees, and we immediately forget the discomfort, forget the fatigue, line up the perfect shot. Sure, we want to go for the champion.

Simply put, we want to go for quality.

What does it take to meet a champ?

On the other hand to raise a champion size trophy for a red deer you have to take care of the game for approximately 12 years and for a roe deer approximately 5-6 years.

Still, in both cases dedication, professionalism, and passion are a must. This is why the money for a champion size trophy is 10 times higher than that for a small, or average trophy.

Unfortunately, most years there aren’t any champion size trophies on the majority of land. Simply put, because there are limits to our resources. Additionally, different lands have different habitats, carrying capacities and other environmental conditions.

So is it worth the effort of managing the mid-range?

Is it valuable enough to manage the “average” professionally?

This is what I would like to answer for you in detail and supported with valid, real-life figures and facts from 10 years’ of game management.

Know the rules to master the game

Let’s start with some rules of thumb.

The size of an antler (and the weight of the animal) is in direct proportion to the quality of the deer – this is a massively researched area so we can take this as a fact.

Furthermore, the size of the game is in direct proportion to how close the population is to the ideal size. As you know, what is considered ideal depends on a bunch of factors such as carrying capacity, space, cover, nutrition and water.

But there is an optimal size even on land that is far from ideal, and we can almost always work on making conditions better.

This happened on the land we use as an example in our series of articles which you can find here: THE SEARCH FOR ANSWERS: THE MYSTERIES OF A ROE DEER POPULATION (PART 1.)

If you’re short of time though here’s a short summary:

The syndicate in question has been led and managed by the same person for 20 years. The land is far from being in an ideal condition and is more suitable for arable farming. Located in a flat, dry and sandy part of northeast Hungary where rows of trees border the arable lands.

In the beginning, overpopulation was a serious issue and the signs of “bad” (or we could say lack of) management were obvious - low body weight, small deer with small trophies as well as massive crop damage.

Subsequently, the manager’s dedication started to pay off both financially for nature.

The price of a champion size trophy

The effectiveness of our approach and efforts are revealed when we collect and record facts and figures over a long period of time.

Without these we just have an opinion based view on our management.

It can also pose a problem, when we have the data but don’t know how to read and use it.

So, let’s see what we can read out from numbers.

Firstly, I would like to give a short introduction on why and how I used them.

I used yearly averages to make my calculations easier. For the protection of the business data of the syndicate I did the calculations by only using older (5+ years) roe buck harvest data. There is also another factor to why I only used this data , namely because, obviously, we will find the largest antlers in this age group.

Secondly, for the calculation of the income, I picked the official price list of a well known and large Hungarian forestry company.

For those who are not familiar with this kind of pricing I will show an example:

If the game manager shows me a beauty with a 770 grams antler, how much will I leave at the cashier?

To sum up, this roe deer would cost me: €8548 just because of its antlers. That money would easily cover the cost of 20,000-25,000 black locust plants in a habitat restoration programme.

On the Hungarian CIC toplist the highest ranked roe buck trophy had 231.53 CIC points and the antler weighed 770 grams. P. Riegel was the lucky person who harvested the game in 1975. (If you want to get into the top 50, you have to reach at least 180 CIC points and the lightest trophy on the list is 509 grams.)

The data from the syndicate we use as an example is perfect, because we will see that the land is populated with “average” sized deer (with average size trophies). And this is closer to reality than playing with imaginary numbers.

What can we garner from this table?

The highest average trophy weights were found in years 2010 and 2014. Both years, the average income from a roe deer was around €860 due to the weight of the trophies.

A look at the chart below makes the whole situation more obvious. 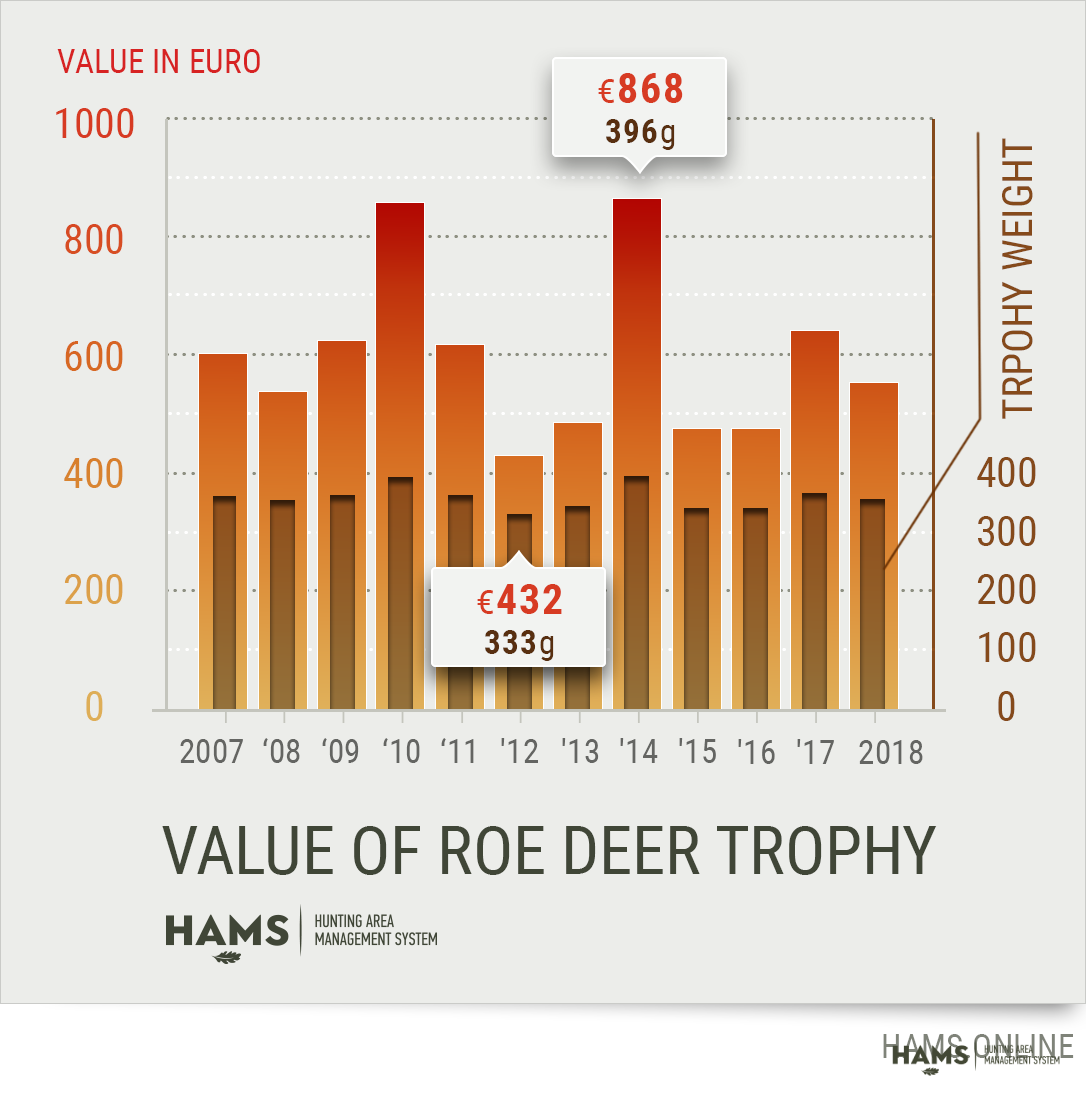 How do trophy values affect yearly income, particularly if we take harvest numbers into consideration? 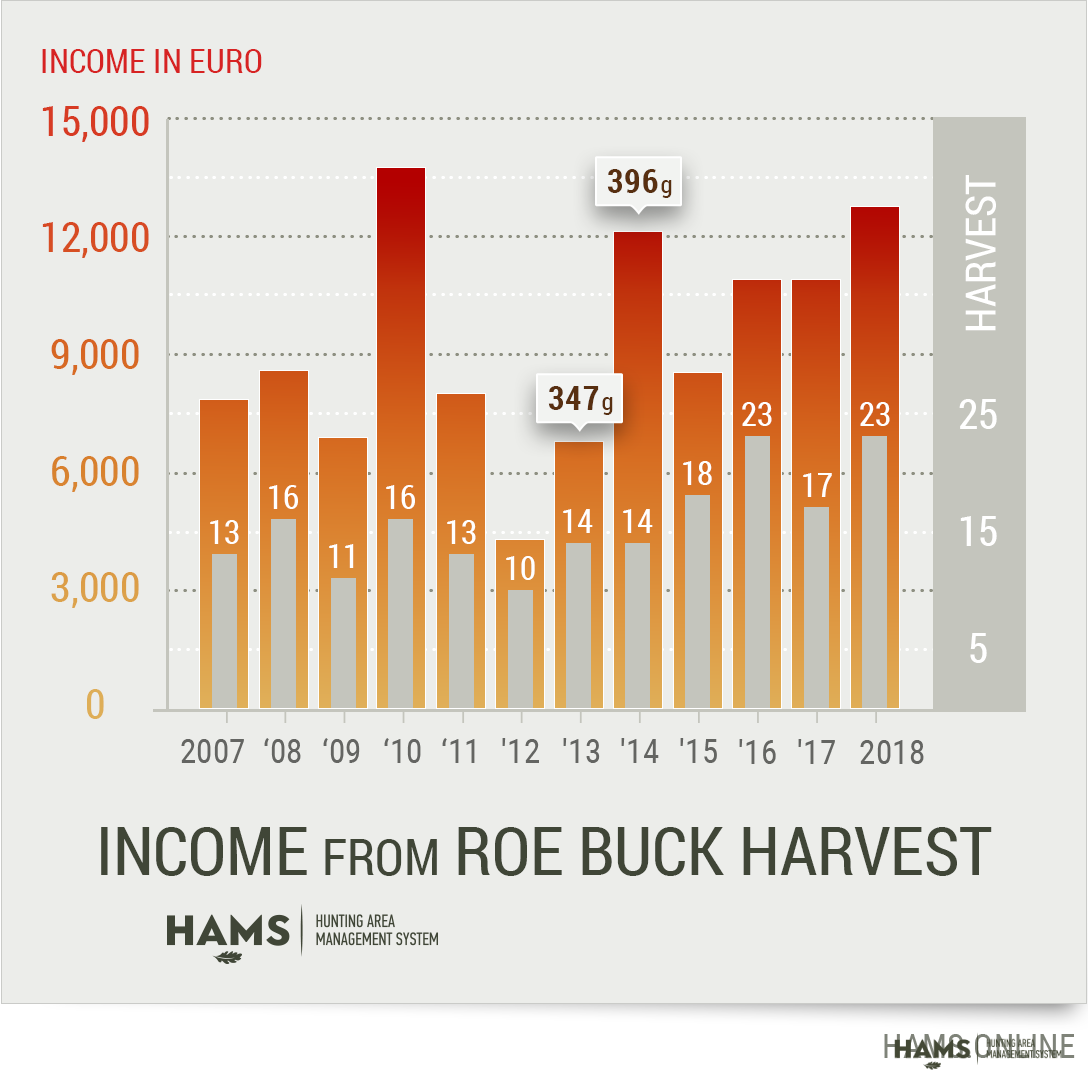 It is obvious that this kind of pricing (maybe I should rather call it valuation) punishes the small antlers but on the other hand motivates the game managers.

It is a clear demonstration of supply and demand that rewards quality deer management in opposition to point based pricing that does not reflect the quality.

We mentioned earlier that there has to be a correlation between body-weight and antler weight plus the population size.

Will our data pack confirm the scientific research? 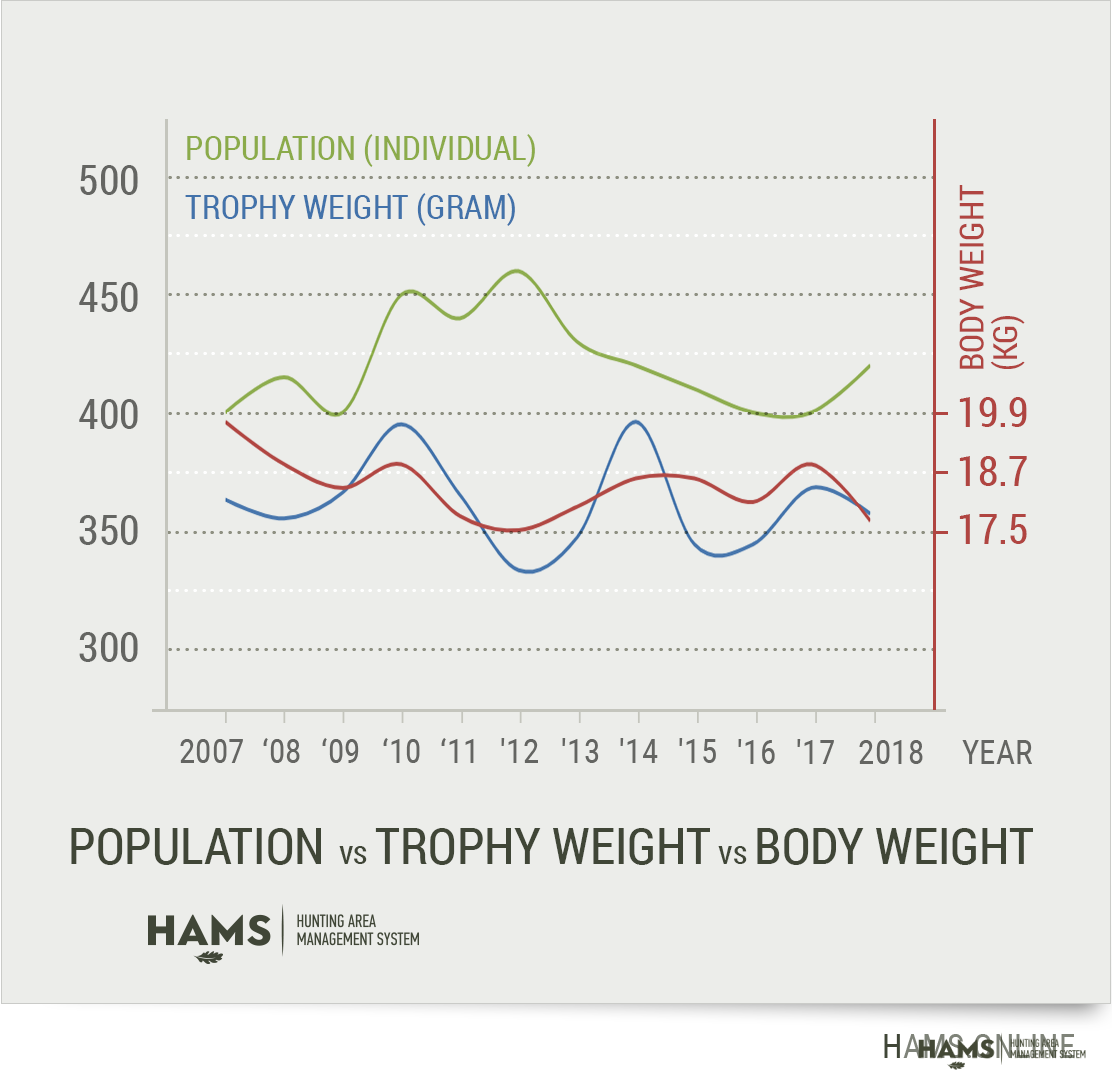 The correlation is not perfectly accurate but if we take into consideration the errors of the population estimation methods* and we watch the numbers over the long term the trend is visible: larger population size results in smaller antlers and less body weight. This leads to a massive loss of income even when the population grows by only 15%.

*On this land sampling was in use, but they are using thermal cameras for more accuracy from this year.

There is a common saying used by project managers: “You can argue with people, you can argue over opinions, but you look really dumb when you argue with a graph that contains the facts.”

We don’t have to be a scientist to see the correlations and the value of properly carried out game management.

Accurate administration with software like HAMS makes the reality visible and obvious.

No question, digital administration and analysis of data can help you make better decisions.

It is not disrespectful towards our heritage to use software for planning, observing and recording bag numbers. Those who really care about wildlife and the profitability of their land should use the available best tools to support their management.

Much like all the equipment we use it is best to have the best available tools to ensure we do the best possible job.

Pen and paper are no longer enough, they can’t process the big data, and won’t draw graphs for you.