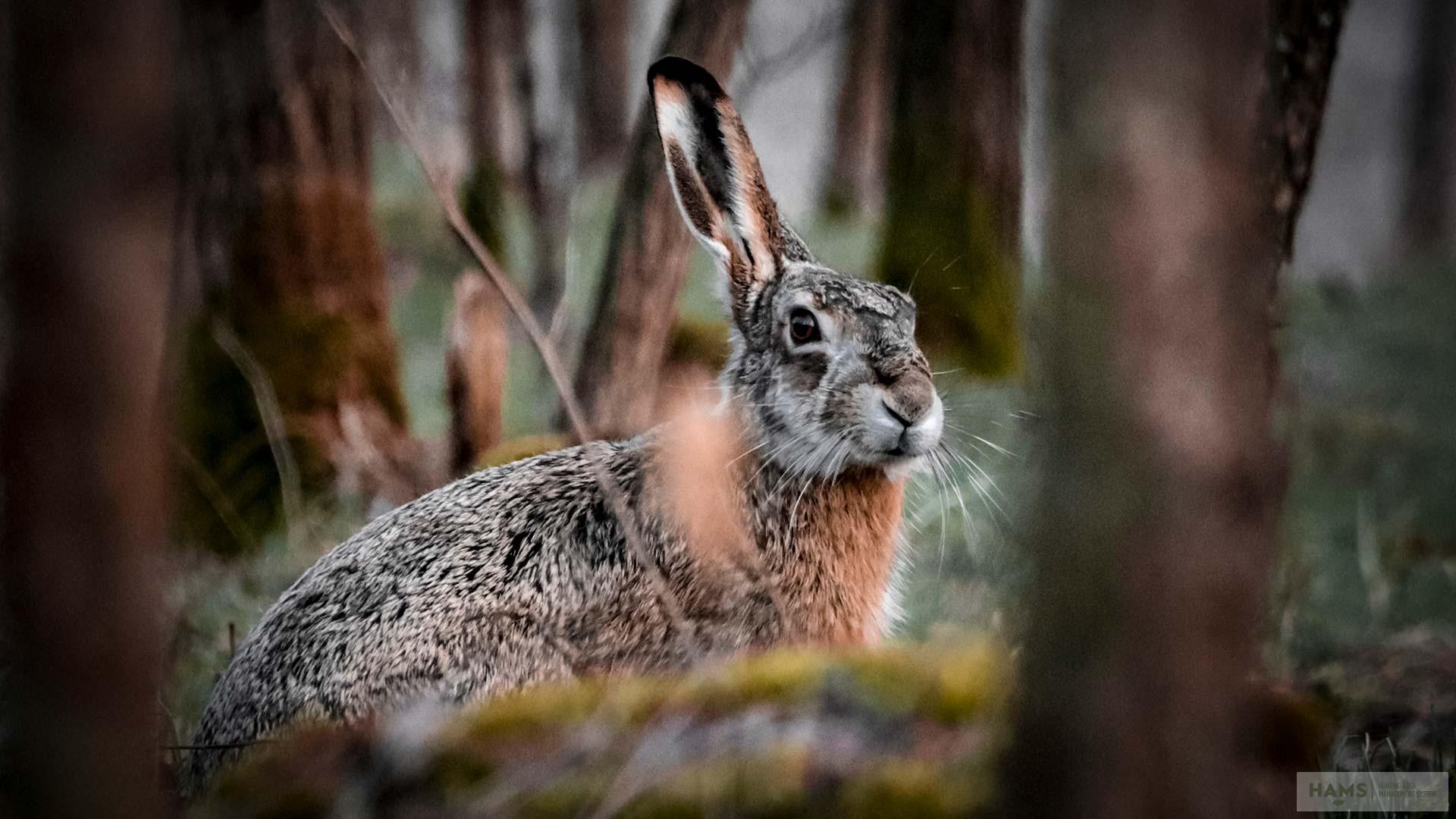 One of the most profitable methods in managing a hunting area with brown hare is to organize live captures. During a live capture, hares are caught alive and then sold to foreign countries.

In Hungary, brown hares can only be captured alive from the 1st of October to the 15th of January. The capture happens only once in a season and, depending on the number of hares to be caught, lasts between 2 to 3 days.

The game management unit we went to is located in the Northern region on the Great Hungarian Plain. It is a hunting ground of 6,000 ha (approx. 15,000 acres) and they have an estimated number of 3,000 hares, along with stable pheasant and roe deer populations, and a few wild boar. The harvest is around 300 hares per season, of which 250 are planned to be captured and sold.

Every capture needs to be carefully planned; the harvest quantity, timing, beaters and catchers, and the contracts with the customers all need to be assessed beforehand. This is also where a digital wildlife management software comes in handy. The rule of thirds in brown hare capturing is quantity, timing and equipment. Let’s take a closer look at all of them.

How much? - Harvest quantity

The total population estimation is carried out in early spring. At this game management unit, two methods are used. By using spotlights and thermal cameras the hares are counted during the night for three consecutive days, and all the observation data is stored in HAMS for later use for stock estimation.

After the reproductive season, at the start of the hunting season, a sample hunt is carried out. At least 30 specimens are harvested to establish the sex ratio of the population and to examine the placental scars. The latter shows the fertility and the total number of newborns during the last breeding season (average number of newborns/female). Based on this information, the harvest plan can be set in compliance with the population size and financial strategy.

All of this data is then simply recorded using HAMS which then helps us to set up a harvest plan for the current season.

The capture cannot be done too early in the season as it is difficult to sell them at that point, but it cannot be carried out too late either, as this will threaten the breeding population. Therefore, the capture is usually carried out in late November or early December.

The main tool used is, of course, the net and loads of hands. The net has to be soft so it does not injure the animal, but strong enough in order to hold it, as well as water-resistant and light in weight. There are different types of nets: the Polish net, Hungarian net, Italian net and the cover net. The Hungarian, Italian and Polish nets are all tied to posts (stakes) at every 3 meters and, therefore, not laid on the ground. When a hare runs in it, the net falls off the post and the hare gets tangled in it. As you can see in the picture, during this capture, a cover net was used, which is laid on the ground and is lifted the moment a hare runs in it.

Besides nets, people are also required: a lot of beaters (50-60) are needed to drive the hares into the nets, as well as catchers (min. 20-25) who catch the hares and, lastly, drivers (4-5) who drive the vehicles.

The organisers had used the Driven Hunt Planner feature in HAMS to clearly show the directions of the drives and mark the locations of the catchers and the beaters.

Other equipment that is needed includes transportation boxes, feed for the hares and medicines (eye drops against infections and inflammation).

Hard work, detailed planning, long term monitoring... but what is the outcome?

These hares will be exported to either France or Italy, where they will be used to increase the breeding population or increase hunting opportunities.

Not to mention the financial benefits of the proper, responsible and accountable management. Because with the help of the professional approach this unit is able to finance their management efforts easily.

The hares are caught with a net that has a length of 1 km that is folded and laid on the ground. At every 20 meters, a catcher sits on the ground with a box in front of him.

The net is not set on the horizon or at the top of a hill, but rather behind it, so the hares cannot directly see it.

Open fields, meadows and pastures are the best.

Even better sites are where two-sided (“contra”) beatings can be held. Here, hares are driven from opposite sides into the net. The beaters are placed in a U-shape, approximately 1 km from the net, and drive the hares in the direction of the net. The moment a hare runs in the direction of the net, that part of the net is lifted and the hare is caught. The hare is taken out from the net and placed, head first, in the transportation box.

After the second capture, the day started to clear up and the sun started to shine. Even when it was the end of November, it felt like spring. And as a nice cherry on top, two rainbows even appeared. Can we ask for more to spend the day out in nature while it shows its full scale?

Although I arrived with my camera in my hand, I realised soon I could earn reputation only if I show I am a useful asset and not just a tourist with a degree in wildlife management. The hard work led to not much pictures on the day, but I could earn the respect of the local hunters. And as the beaters went to another area where the last capture would take place, the older hunters opened up and I could see some insights on their life, their past and their approach to hunting. “In the past, there were a lot of small farms in this area, I grew up on one of them. I lived here all my life,” said the oldest hunter to me. “We harvest the most hares before Christmas, so we have them for Christmas dinner. Can you believe that we actually have a hunter in the club who doesn’t eat game meat?”

The question of ethics in hunting slipped in without a sign and turned the discussion towards topics of responsibility and sustainability.

“We have to be careful and responsible with the harvest” added the professional hunter.

“If the hare population gets too low, it’s very difficult to bring them back, so we are very cautious with the harvest. This is why it’s important to use a system like HAMS. Monitoring the changes and knowing the numbers is fundamental.”

I nodded because I was taught this for years and I couldn't agree more. “Currently, we have a very stable hare population, which is good for the profit.”

The older hunter sipped the last drops of his coffee and turned to the professional hunter:

“Tomorrow, during the weekend, my grandchildren will participate in the drive as well, but today, I didn’t want them to miss school.”

Before the conversation could move on we had to get back to work. The last drive could start because while I was listening to the locals with the rainbows in the background, the net was placed and the catchers and beaters lined up. This last capture was done from two directions (contra).

Unfortunately, in this area, there were not as many hares. A lot of hares managed to escape during the drive, through the beaters’ line; also a roe deer popped up and gracefully made its way out to the other side of the field.

Though a total of 39 hares were caught during the last capture. Qualification of the hares

Before the hares are transported to France or Italy, they are thoroughly examined, their eyes are treated with eye drops and food is given. Sick or weak animals or animals that are too small (less than 3,5 kg) are removed. Evaluation of the capture

After the capture, it is important to evaluate the capture and collect data from the event. Information such as:

With this, we can improve the activity, eliminate problems, compare and reveal population trends, and therefore, improve the management of brown hares on hunting grounds.

What started out as a cloudy and rainy day, ended with sunshine and rainbows. During this day, a total of 121 hares were caught, which was a very nice result as they “only” have 129 hares to go, which might be done in one more day and hopefully the older hunter and his grandson can spend a successful day together.

After the capture was finished, we headed to the hunting lodge. We all cleaned our boots, as they were heavy from the mud, and sat down for a quick dinner while the sun was setting before we started our long drive home, filled with a nice meal, beautiful moments and with the satisfying feeling of tiredness.

The management of brown hares

Capturing hares alive and exporting them, or shooting them, are management methods that need to be carefully planned. Hares have declined over the last 4 decades due to intensified agriculture; plus, they are very sensitive to weather conditions and quickly respond to changes in the habitat, thus, large year-by-year fluctuations can be seen in the population.

Depending on the quality of the habitat, hare populations could quickly increase without any control, which would increase the red fox population as well and danger other small game populations. However, after a while, a quick crash can be seen in both populations as they would run out of resources. Therefore, in hare management, both the hares and the predators need to be carefully managed.

As is said by Charles Hume (a British psychologist):

“Conscience implies a sense of duty, and this infers a moral obligation and a human responsibility towards animals; not only to those species which have been bred and reared to be of service to man but also to those which have been affected by man’s environmental modification.”